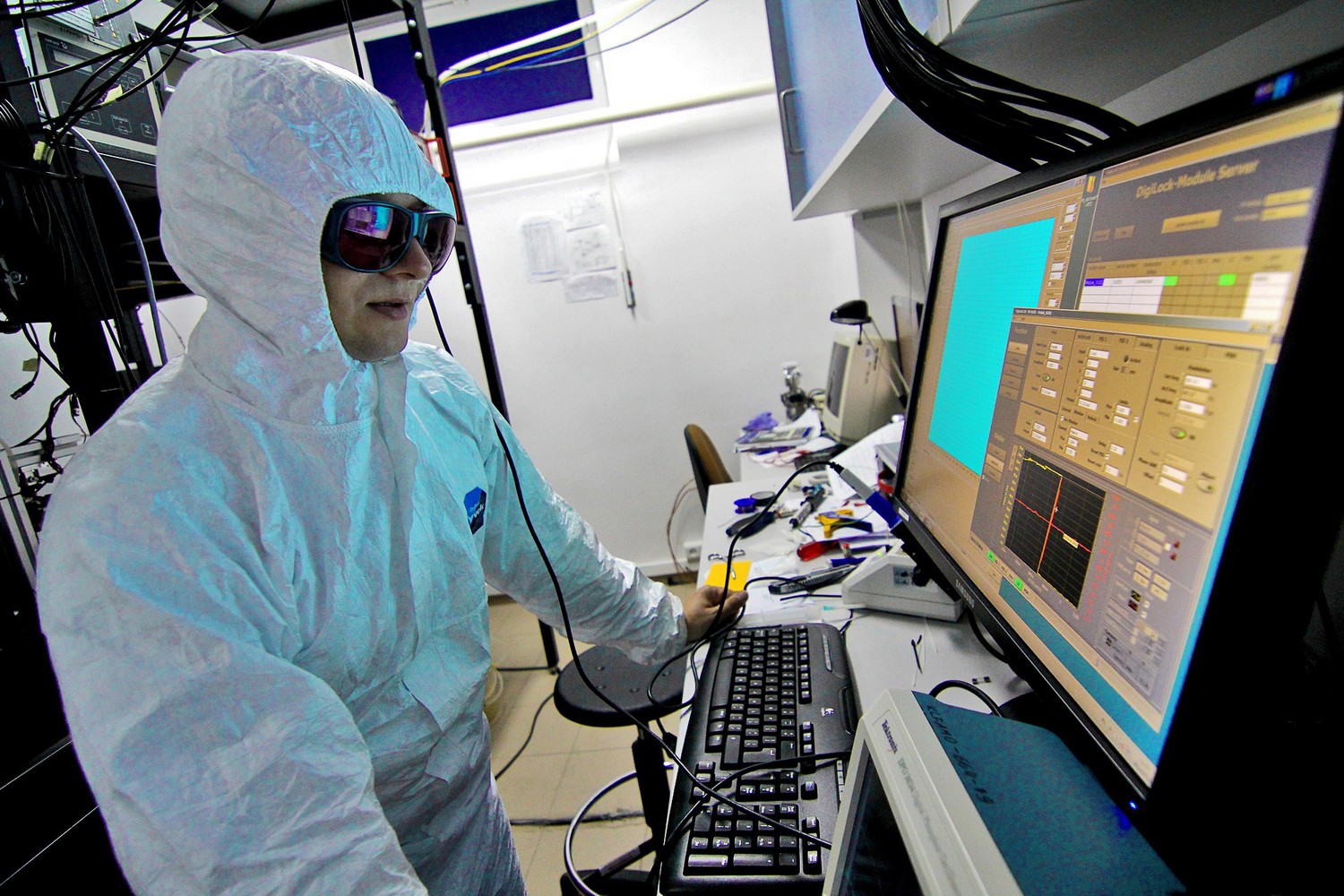 Researchers from the Institute of Physics at Nicolaus Copernicus University (NCU) have conducted a pioneering experiment using an optical atomic clock to search for dark matter. Their findings have just been published by prestigious “Nature Astronomy”.

The publication is a work of researchers from the Department of Atomic, Molecular and Optical Physics at the NCU’s Institute of Physics. The lead author is doctor Piotr Wcisło, with the co-authors being: doctor Piotr Morzyński, Eng., doctor Marcin Bober, doctor Agata Cygan, professor of NCU Daniel Lisiak, PhD, professor of NCU Roman Ciuryło, PhD, and doctor Michał Zawada, PhD. The fact that all the authors of an article published by a journal of such status come from one research centre is unique in Polish scientific environment. What is more, all the measurements presented in “Nature Astronomy” were conducted in Toruń- at the National Laboratory of Atomic, Molecular and Optical Physics (KL FAMO), using the Polish Optical Atomic Clock(POZA), constructed two years ago as a result of joint effort of scientists from the Warsaw University, Jagiellonian University, and Nicolaus Copernicus University in Toruń.

– The physical effects suggesting the existence of dark matter have so far been observed only in the galactic scale. Explaining the observed motion of bodies within galaxies or the characteristic refraction of light which reaches the Earth would require much stronger gravity than what can be considered an influence of visible matter– says doctor Piotr Wcisło. – Observing dark matter in laboratory conditions would be a real breakthrough. We have managed to make use of a device which allows for searching for dark matter and measuring that if dark matter actually exists, it does not influence the matter known to us more strongly than a certain established value.

It is a step towards solving one of the most fundamental problems of Physics.

– There are a number of theories describing what dark matter is – explains doctor Michał Zawada, PhD. – According to the first and the most popular one, apart from the matter that we can observe, the Universe also contains another type of matter, which we do not see, but which exerts gravitational influence. Calculations indicate that the amount of dark matter is four times greater than the amount of visible matter. For the purpose of searching for dark matter particles, extremely costly experimental sets are constructed.

The second hypothesis assumes that the Theory of Gravity may not be entirely true, and that perhaps some unknown corrective factor should be added to the dependence between force and distance.

Researchers from Toruń focused on investigating another theory, which assumes the existence of macroscopic objects of dark matter, known as topological defects, which were formed at the early stages of the Universe, while it was still rapidly cooling. Such a defect can be imagined as a wall (of unknown thickness), which “travels” across the Universe. – if such an object slides through the FAMO Laboratory, and if it causes any coupling with the matter as we know it, then the most sensitive devices in the world, such as the optical atomic clock, should ‘tick’ in a different manner – explains doctor Wcisło.

Physicists around the world have thought about it earlier, but they assumed that to check the deviations in the clock’s functioning, another type of referential clock would be needed for the purpose of comparing the measurements. The devices would have to be at great distance from each other, yet at the same time connected in a manner which would allow for detecting even the slightest differences-  to compare the readings of instruments, for example, in Poland and Japan, adequate fibre optic connection of exorbitant parameters would have to be constructed.

A pioneering idea of  doctor Piotr Wcisło was the possibility of using only one optical atomic clock, which would be sensitive to the sought distortions. It is enough to consider the frequency standard to be made of not only ultra-cold atoms, but also the optical cavity, which is one of the standard components of such a clock. The frequency of light absorbed by the atoms and travelling through the cavity will react differently to encountering the desired object. Its presence will manifest itself as a difference between the two frequencies.

– Optical atomic clocks using ultra-cold atoms and optical cavities have been used for years, but their potential has long been overlooked- emphasizes professor Roman Ciuryło. – Sometimes connecting simple facts leads to interesting consequences. It was also the case here.

The method proposed by researchers for Toruń has a number of advantages. Firstly, it allows determining new limits concerning the nature of dark matter and, as a result- eliminate erroneous theories. Given the current state of knowledge on dark matter, every response is of immense value, and contributes greatly to our understanding of the world.

– What is really exciting, however, is the fact that we have gained a real chance to positively detect dark matter – says doctor Piotr Wcisło. – Observing any signal confirming its existence would serve as a new opening for Physics and Astronomy, and could  give an answer to numerous fundamental questions which have been baffling contemporary scholars concerning, for instance, the nature of dark matter, actual unchangeability of basic physical constants, or the relationship between the standard model and the theory of gravity, which- despite being internally coherent- are not compatible with each other.

The solution devised by the physicists from NCU is also extremely economical, since the data analysed are provided by an already existing instrument, which was constructed and which is used for other purposes, with no need to construct costly detectors.

– The possibility of testing such ideas is the result of combined efforts made by the Polish scientific circles of researchers of Atomic, Molecular and Optical Physics at the beginning of this century – emphasizes professor Ciuryło. – Thanks to the creation of the National Laboratory of Atomic, Molecular and Optical Physics, it was possible to develop in Poland ultra-modern technologies and such branches of Physics, which were capable of contributing to the construction of Polish Optical Atomic Clock. This, in turn, gave a chance to tackle one of the most fascinating mysteries of the Universe.

NCU’s team of scientists aims not only to continua the studies, but also engage in cooperation with other research centres which own optical atomic clocks and jointly create a kind of global observatory.