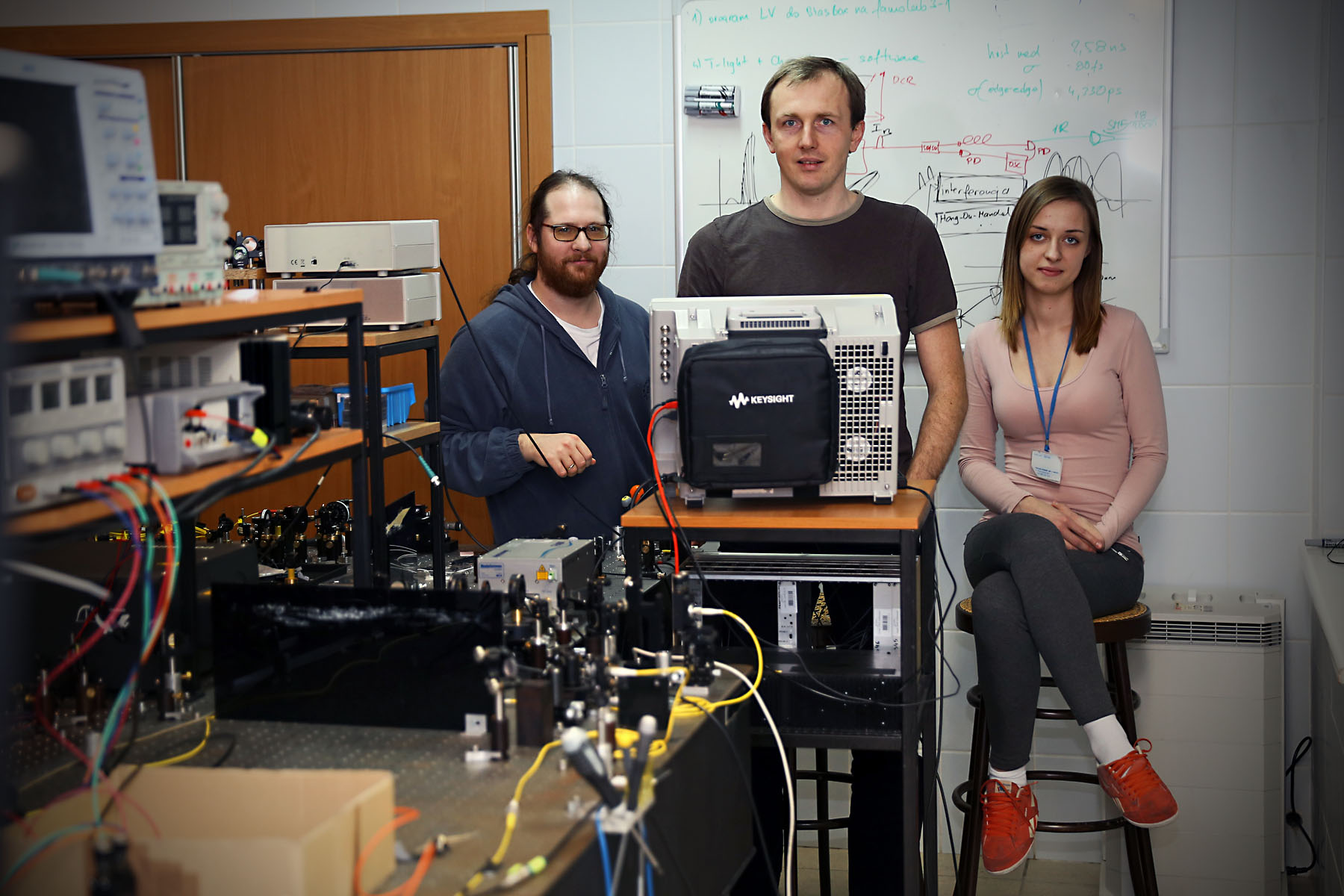 A prestigious “Optica” journal has recently published an article on quantum communication by physicists from Nicolaus Copernicus University in Toruń. Researchers  describe therein a way to improve the transfer of information encoded in elementary particles of light – photons.

The authors of the article entitled Reducing detection noise of a photon pair in a dispersive medium by controlling its spectral entanglement are a team of physicists from the National Laboratory of Atomic, Molecular and Optical Physics of Institute of Physics at Nicolaus Copernicus University in  Toruń: Karolina Sędziak, MA, doctor Mikołaj Lasota and doctor Piotr Kolenderski.

– In our article we have described the possibility to generate photons which will be capable of securely transmitting  information 10-12% further than it was previously possible – explains doctor Piotr Kolenderski.

The distance to which information encoded in photons can be securely sent depends on a number of factors. One of them is the technology for photon detection, which is constantly being improved by the scientists all over the world. Equally important are the optical fibers used for transmission, which at present are already a well-developed technology. Another factor is the source used for generating single photons. Although many scientists all over the world construct this type of instruments,  they rarely touch upon the subject of adjusting the characteristics of generated photons in such a manner that they are best-suited for the purpose of quantum communication. – Almost nobody has worked on that so far, little can be found in literature on that matter– the researcher adds– We have decided to do something about it. We have created a theoretical model and conducted the computations. The results of our work turned out to be very interesting and resulted in the publication in “Optica”.

The article is a presentation of a certain theoretical idea, which the trio of the researchers is currently transferring into the experimental phase. Apart from the photon source,  it requires superconducting single-photon detectors. The ones used in the National Laboratory of Atomic, Molecular and Optical Physics were purchased in December last year thanks to an equipment grant awarded by the Ministry of Science and High Education. They are very efficient (they inform about the appearance of a photon in 65% of cases a photon was present at the detector) and very fast (precisely indicating the moment of a photon’s appearance), but their proper operation requires rigorous laboratory conditions, namely cooling to the temperature of about -269 degrees Celsius.

– The heart of the whole idea is a special non-linear PPKTP crystal– explains doctor Kolenderski. – We shine a  red laser beam through it, causing some of the photons to split into two. The pairs of photons generated in such a way possess a purely quantum property, so-called entanglement, which means that some of their properties are strongly correlated. Our goal is to send one photon via optical fiber to one person, and the second photon to another person. Thanks to the entanglement it is then possible for them to generate bits of secret key which can be used to secure information they may want to send to each other later on.

Such a method can be used to ensure that transmitted message is completely safe. How can it happen? The aforementioned entanglement helps to extend the secure range of fiber’s transmittance and allows to generate a cryptographic key (a random series of bits  – ones and zeroes), known only to the two parties attempting the confidential exchange of information. Thanks to the sensitivity of a photon pair to any outside interference, any attempt to alter or copy the information encoded within it can be immediately detected. This is because any attempt to ‘eavesdrop’ significantly distorts the state of a photon – It cannot be unnoticed – assures doctor Kolenderski.

Solutions which allow for sending quantum information are already used by government institutions and some banks. They may be desirable in all kinds of situations when parties wish to conduct safe exchange of confidential data – Rumor says that an optical fiber used for sending quantum information connects the Pentagon with the White House – reveals doctor Piotr Kolenderski. – There are already a few companies producing this type of devices, so if an institution needs such an equipment, it can be purchased. What we have described in our article allows for improving the existing solutions.

The publication in  “Optica”, which is considered one of the major titles in optical sciences, is a joint effort of researchers working at the Faculty of Physics, Astronomy and Applied Informatics of Nicolaus Copernicus University. The fact deserves special attention, as most of the articles published in this journal are a result of international cooperation. What is more – as the authors claim – the research they are conducting provide interesting prospects for experiments, and can be used also in other branches of science. For example, in the future it will be possible to use this kind of source to study the interactions between light and molecules.